Rana Ayyub is a prominent Indian journalist from the print media. She is currently an independent commentator on current political affairs. Previously, she had worked with the Left leaning Tehelka. She had resigned from Tehelka over the handling of Tarun Tejpal rape case by the magazine. The resignation in protest had elevated her profile as a journalist who can stand for what she considers is right. The reason is also said to be plain refusal by Tarun Tejpal to publish her investigative reports on Gujarat riots.

Rana Ayyub is also known to having pathological hate for Narendra Modi. She worked as an investigative journalist with Tehelka where she was part of the heinous campaign of the Congress led UPA government to malign Narendra Modi in particular and Gujarat in general.

Rana Ayyub is from Mumbai.She has done her entire education from Mumbai. Her father was also a well - known journalist.

There isn’t any denying that Rana Ayyub is really beautiful. She is endowed with amazing physical features coupled with gorgeous face. Her curly hair only enhances her mesmerizing beauty. Naturally, people want to know about her relationship status.
There isn’t any information in the public domain about the personal life of Rana Ayyub. I don’t know about her relationship status. Who is her boyfriend is still a mystery? And, in fact, if she is married then who is her husband?

As soon as I will have any trustworthy information about her relationship status, I will update that here.

The Controversy of DNA Article

Rana Ayyub had written an article for DNA after Amit Shah had become the President of the BJP. Within one hour, DNA had removed the article from its website. This led to huge uproar in the social media about the danger of freedom of expression.
However, it turned out that DNA had to remove the article because of the factual errors. Rana had used lots of hard words with factual errors about Amit Shah.

On a side note, take a look at the following two tweets of Rana Ayyub to understand how conveniently she can change goal posts to suit her political masters: 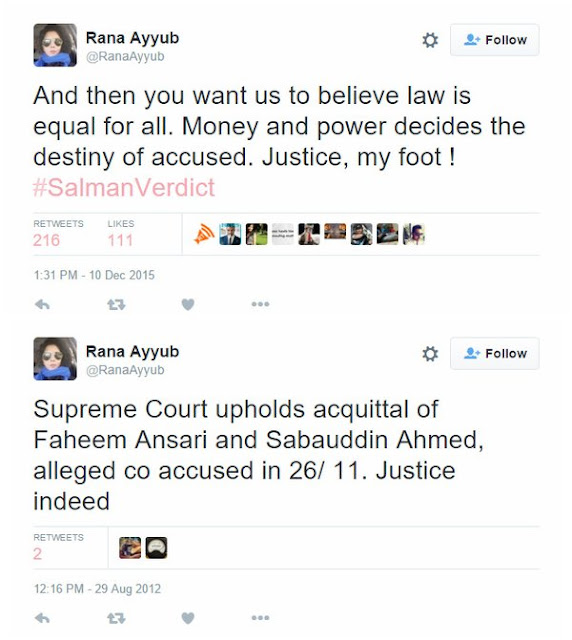 Propagating falsehoods with a political motive can’t be clubbed in the ambit of the freedom of speech.

Praniti Shinde is one of the most respected young politicians of Maharashtra. In a short span of time, she has made a name for herself. People are no more recognizing her as being the daughter of Sushil Kumar Shinde. She has become a politician who is working tirelessly for her constituency. Interestingly, the Fadanavis government gives so much attention to her tirades against government’s policies and programs. She is at the forefront of demanding transparency and removing corrupt ministers. People of her constituency are seeing the image of future Chief Minister in her. It is quite unfortunate that such a sharp and maverick leader also ran out of dignified words when addressing her opponents. In a recent rally, she had targeted Modi and called him a mosquito spreading dengue.  Praniti Shinde Praniti is not a novice in the world of public relations and politics. In fact, it is a matter of great satisfaction that she entered politics with full preparation. She got degre
Post a Comment
Read more

Ajith Hanamakkanavar is one of the most respected journalists and TV anchors of Karnataka. He is the popular anchor of Kannada News Channel Suvarna News 24X7. Ajit has always been controversial for being unbiased and having a habit of calling spade a spade. During news debate, he keeps on throwing probing questions to all panelists, irrespective to their political association. Ajit was recently in news for his comment against Prophet Mohammed. When a Mulsim fanatic abused Lord Rama on the show, he simply replied that Prophet Mohammed might have done something inhumane. He later apologized. FIR was filed against him. A Muslim organization based in Mangalore issued death threat against him. The then Government of Congress-JDS alliance denied giving any sort of protection to him. At the same time, the Government decided to give protection to Bhagwaan, the author of a controversial book on Lord Rama. Following is the brief wiki and biography of Ajith Hanamakkanavar :
Post a Comment
Read more

In her long political career, Mamta Banerjee has always tried to remain transparent in her personal life. She wants to be like an open book – without any sort of secret. There has always been speculation about her relationship status. That she is unmarried is a well – known. However, people want to know about any sort of romantic relationship with which she was ever involved with. A TMC leader named Dipak Ghosh had once said that Mamta Banerjee was in romantic relationship with a Youth Congress leader for a brief period of time in late 1980s. Boyfriend of Mamta Banerjee The claim of Dipak Ghosh was never verified. His source of information was also not credible. There is absolutely no proof – print or image or anything which show that Mamta Banerjee was ever in a committed sort of relationship. On her part, Mamta Benerjee has always said that she was preoccupied with anti – CPM struggle which didn’t give her time to even think about marriage or having love affair.
Post a Comment
Read more