Sushil Kumar Modi is the Deputy Chief Minister of Bihar. He is the tallest BJP leader from Bihar, but also remained a leader who has been continuously detested by a powerful group of Bihar BJP leaders, including Giriraj Singh. He bore the brunt of humiliating loss that the BJP had in the last Assembly Election. He was sidelines and didn’t get Rajya Sabha nomination. He was also denied any position in the state party. But, Sushil Modi didn’t take any backward step. He started to attack Nitish led government from the very first day and soon became the face of opposition of Bihar.

Later, he transformed himself as an anti – corruption crusader with his scathing attacks on Lalu family members and their web of illegal real estate properties. Sushil Modi well documented attack led to fall of Mahagathbandhan and virtual #gharwapasi for Nitish Kumar as JDU – BJP alliance formed the government.

Sushil Kumar, the demolition man of BJP, is a lifelong pracharak of RSS. Like others, he had also taken vow to remain bachelor. However, he fell for a girl and later married. The name of his wife is Jessie George, a Christian. Yes, the wife of the firebrand Hindutva Bihari leader is a Christian.

Sushil Modi had decided to not get married. His family members tried their best to convince him without success. He was also jailed for 24 months during emergency under MISA. 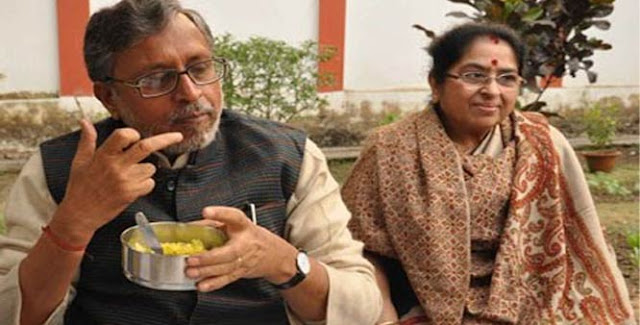 In 1984, Sushil Modi was scheduled to go to Kashmir for an RSS event. He boarded a train in Delhi. A girl was sitting beside his berth. She was Jessie George. When Jessie learnt about Modi’s RSS connection, she started to bombard him with lots of questions. Like others, she was also having a misconception that RSS is against other religions.

Sushil Modi listened to her queries and cleared all doubts. The journey was quite fruitful for Jessie. She, being a history scholar, had learned many lessons of history. She developed keen interest in Sushil Modi. She asked for her postal address (there were no email or mobile phone in those dasy, oops!).

Once the trip ended, Jessie started to write letters to Modi who used to reciprocate. They had one more meeting in Mumbai. At that time, Jessie proposed her which Modi refused citing his RSS link and oath to remain pracharak for life. Few days later, Sushil Modi felt that he was also in deep love with Jessie. He was on a crossroads. Being an active RSS pracharak and All India General Secretary of ABVP, it was not possible for him to get married. He met Rajju Bhaiya and discussed this issue. Rajju Bhaiya asked him to go to Atal Bihari Vajpayee who suggested him to listen to his soul.

Few days later, Sushil Modi made up his mind for marriage. He resigned from ABVP and left RSS.

Sushil Modi and Jessie got married on 13th August, 1986. Jessie shifted to Patna and soon got a job in Patna Women’s College. Sushil Modi started a computer institute named Modi Computer Institute in 1987. That was the first computer institute of Bihar (even before NIIT or Aptech). The institute was before its time. The return on investment was not sufficient. Disenchanted with all this, Modi again joined politics. He closed down his institute in 1990.

It must be noted that since 1990 Modi is not a part of RSS. Further, Modi has never asked his wife for conversion. His wife is still a practicing catholic.

Sushil Modi and Jessie have two sons – both of them have studied from Mayo College, Ajmer.

Praniti Shinde is one of the most respected young politicians of Maharashtra. In a short span of time, she has made a name for herself. People are no more recognizing her as being the daughter of Sushil Kumar Shinde. She has become a politician who is working tirelessly for her constituency. Interestingly, the Fadanavis government gives so much attention to her tirades against government’s policies and programs. She is at the forefront of demanding transparency and removing corrupt ministers. People of her constituency are seeing the image of future Chief Minister in her. It is quite unfortunate that such a sharp and maverick leader also ran out of dignified words when addressing her opponents. In a recent rally, she had targeted Modi and called him a mosquito spreading dengue.  Praniti Shinde Praniti is not a novice in the world of public relations and politics. In fact, it is a matter of great satisfaction that she entered politics with full preparation. She got degre
Post a Comment
Read more

Ajith Hanamakkanavar is one of the most respected journalists and TV anchors of Karnataka. He is the popular anchor of Kannada News Channel Suvarna News 24X7. Ajit has always been controversial for being unbiased and having a habit of calling spade a spade. During news debate, he keeps on throwing probing questions to all panelists, irrespective to their political association. Ajit was recently in news for his comment against Prophet Mohammed. When a Mulsim fanatic abused Lord Rama on the show, he simply replied that Prophet Mohammed might have done something inhumane. He later apologized. FIR was filed against him. A Muslim organization based in Mangalore issued death threat against him. The then Government of Congress-JDS alliance denied giving any sort of protection to him. At the same time, the Government decided to give protection to Bhagwaan, the author of a controversial book on Lord Rama. Following is the brief wiki and biography of Ajith Hanamakkanavar :
Post a Comment
Read more

In her long political career, Mamta Banerjee has always tried to remain transparent in her personal life. She wants to be like an open book – without any sort of secret. There has always been speculation about her relationship status. That she is unmarried is a well – known. However, people want to know about any sort of romantic relationship with which she was ever involved with. A TMC leader named Dipak Ghosh had once said that Mamta Banerjee was in romantic relationship with a Youth Congress leader for a brief period of time in late 1980s. Boyfriend of Mamta Banerjee The claim of Dipak Ghosh was never verified. His source of information was also not credible. There is absolutely no proof – print or image or anything which show that Mamta Banerjee was ever in a committed sort of relationship. On her part, Mamta Benerjee has always said that she was preoccupied with anti – CPM struggle which didn’t give her time to even think about marriage or having love affair.
Post a Comment
Read more