Tina Dabi is a 2016 Batch IAS officer of Rajasthan cadre. She has broken the record by becoming the first Dalit to top the UPSC Civil Services Examination. Tina has always been a mercurial young girl and has shown immense potential throughout her career. This result is a testimony of her determination. She has obviously selected for IAS as her first choice and Haryana as her first choice for cadre. However, she couldn't get Haryana and was settled with her second choice - Rajasthan.

The UPSC Civil Services Examination is the most prestigious competitive examination of India. The Civil Services result for 2015 has reflected the true spirit of Indian secularism where the first ranker is a Hindu, the second is a Muslim and the third one is a Punjabi/Sikh. It has also again showed the growing clout of woman in the Indian Civil Services.

Tina was born in Bhopal. She shifted with her parents to Delhi when she was in class VII. Since then she is living Delhi only. She has done schooling from Convent of Jesus and Mary.

Her mother Himani Dabi is an engineer while her father Jaswanth Dabi is working with the Department of Telecom, also as an engineer. Actually, both of her parents had cracked UPSC Indian Engineering Services - IES. As a matter of fact, Himani Dabi had done B. Tech from NIT, Bhopal from where she was a topper. Tina has one younger sister, named Riya.

After completing her schooling, she took admission in the Lady Sriram College of Commerce in 2011. She didn’t go for B.Com from here, rather she took admission in B. A. Political Science. You will be surprised to know that from this very year she had started to prepare for UPSC Civil Services Examination. She had in fact taken admission in Rau's IAS Academy in 2011 when she was only 18 year old. Here are two images of Rau's IAS Enrollment Form. 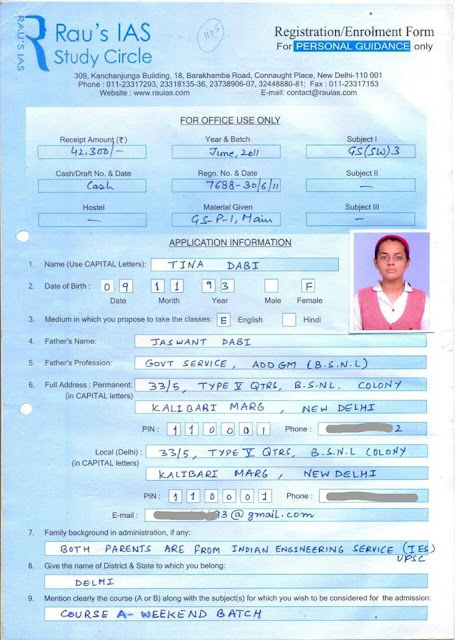 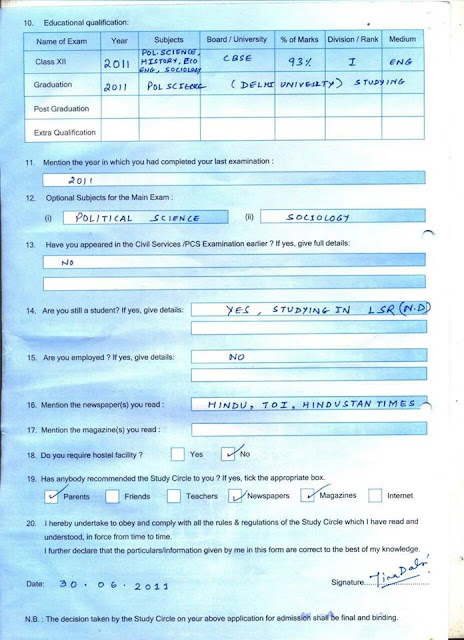 She has deep interest in the Constitution of India and the Indian politics from her school days. Her interest got reflection in her very first year result where she was topper among of Delhi University in Political Science discipline.

Tina Dabi is also endowed with amazing oratory skill. In fact, she has been a profound debater since her school days. 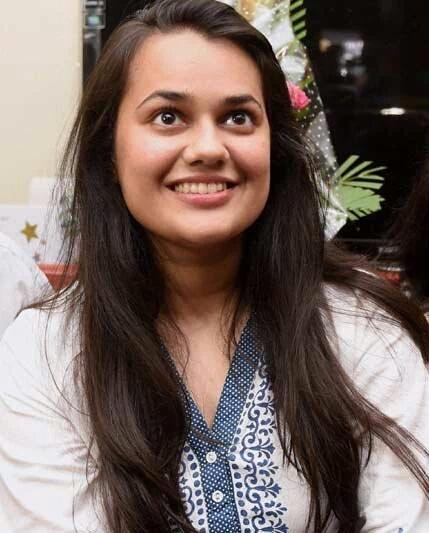 She was the Vice Speaker of Youth Parliament, 2012 where her performance was simply scintillating.

It is even more pleasant to see that Tina has cracked the exam in her very first attempt. And, she is only 22 years old. In that sense, if she continues to work as an IAS, someday she will become the Cabinet Secretary to the Government of India.

There is no denying that Tina is an inspiration for Indian youths, particularly girls.
Tina’s family is settled in Delhi.

As a matter of fact, Tina Dabi is a Dalit girl. Isn't it pleasant surprise that a Dalit girl topped the UPSC Civil Services Examination at the age of 22 years in her very first attempt? By caste, she is a Kamble, a SC.

There is no denying that Tina is quite beautiful and adorable. It is natural that youngsters also want to know whether she is any committed relationship or not.

Tina has recently updated her relationship status on her Facebook profile. She jumped from being a singer to 'In a Relationship'. And, the man with whom she is now hooked is none other than the Second topper - Aamir Athar Khan, a Kashmiri Muslim. Both of them have got Rajasthan Cadre and hence it will be easy for them to manage their marital relationship. In coming years, they will be among the most powerful couple of India.

Tina and Athar got married on 8th April. Tina went ahead with Islamic ritual and tied the knot at the time when no Hindu marriage is allowed. In all probability, she will not get converted to Islam just to ensure reservation in promotion.

Renu Raj is a 2016 batch IAS officer of Kerala cadre. She is a woman known for her steel resolve and strong determination to lead the fight against all odds. Her life is replete with motivational events and that’s why she is being seen as a beacon of hope for young girls around India. This inspirational IAS officer is also showing guts to take administrative actions and decisions as per prevailing rules. It is tough to persuade Renu Raj to do something unlawful. Many politicians have tried without an iota of success. Kerala is fortunate to have many successful women IAS and IPS officers. Renu Raj is an integral part of this pious chain. Following is the brief wiki and biography of Renu Raj : Real Name:  Renu Raj ………………………………… Nick Name: ………………………………… Date of Birth:  ………………………………… Age:  ………………………………… Father:   ………………………………… Mother: V S Latha   ………………………………… Educational Qualification:  MBBS. Renu Raj was a practicing doctor when she had
Post a Comment
Read more

Lipi Singh is a 2016 batch IPS officer of Bihar cadre. She is currently posted as SP of Munger district. In a short span of time, she has attracted attention for being a tough police officer. Her courageous attitude against mafias of Barh and Mokama regions has given her a new recognition as Lady Singham of Bihar. In fact, Anant Singh has become a foe of Nitish Kumar precisely because of her. Lipi Singh had broken the ring of illegal businesses of Anant Singh in the area. Lipi Singh is the daughter of senior JDU leader and former UP Cadre IAS officer RCP Singh. She might have got favourable area for being the daughter of the right hand man of Nitish Kumar. However, taking a look at her performance, it can be safely said that Lipi Singh is completely apolitical when it comes to dealing with law and order of her area. Following is the brief wiki and biography of Lipi Singh : Real Name:  Lipi Singh ………………………………… Nick Name: ………………………………… Date of Birth:  18
Post a Comment
Read more

Prashant Kumar Kovind is the son of the 14 th President of India, Mr. Ram Nath Kovind. The decision of NDA to project Ram Nath as the Presidential candidate had surprised many analysts and people started to look for more information about him. He has a very small family – with wife and two children. Apart from Prashant, Ram Nath Kovind has one daughter named Swati Kovind. It is quite natural that the status of Prashant Kumar has become like that of a celebrity. But, he remained a down to earth person. He has never used the status of his father as a senior BJP politician and later as a Governor. But, the situation is going to be changed now. He will live in the Raisina Hill and will be protected by the Presidential guard. Prashant Kumar Kovind in his marriage ceremony with Modi Biography and Wiki of Prashant Kovind Prashant Kumar was born and brought up in Kanpur. Ram Nath was a struggling Supreme Court lawyer at that time, even though he had cracked UPSC Civil Services
Post a Comment
Read more

Asif Ghafoor is one of the most decorated Army officers of Pakistan. Currently, he holds the rank of Major General and is the Director General Inter Services Public Relations (DGISPR). He has been quite successful in showing the humane face of Pakistani Army to the world while presenting the tough attitude it has for terrorists and other non – state actors. His presentation has been immensely good during recent India – Pakistan skirmishes. The way he maintained calm and composure amidst conflicting news and views is being appreciated throughout the world. Asif Ghafoor is a strong proponent of popularizing Pakistani Army through social media networks. Needless to say, he has also been successful in this endeavour. Apart from being a highly educated person with proficiency in strategic decision making, Mr. Ghafoor is also credited for cleansing Swat Valley from the clutches of terrorists. Following is the brief wiki and biography of Asif Ghafoor : Real Name:  Major Gen
Post a Comment
Read more