Shama Mohamed is a dentist and politician linked with the Indian National Congress. She is one of national spokespersons of the Congress party. In a very short span of time, shama has impressed viewers and panelists with her incisive and informative comment on various issues. She remains gracious and cool in the most trying circumstances. 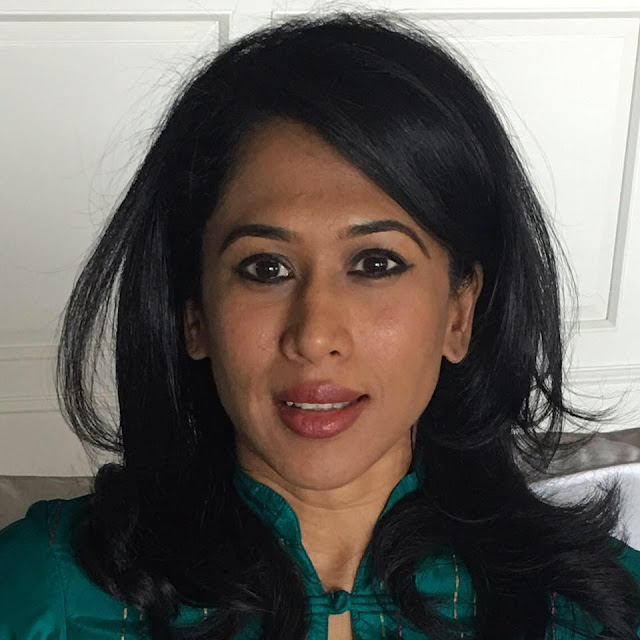 Shama is being seen as the rising star of the party. If she holds her fort on debates and political programs, the party may give her even bigger responsibility in future.

Following is the brief wiki and biography of Shama Mohamed:

Awards and Recognition:
…………………………………
Net Asset:
…………………………………
Relationship Status: Shama Mohamed is married. Following is the picture of her with husband whose name is not available on the public forum. Sushil Kumar Modi is the Deputy Chief Minister of Bihar. He is the tallest BJP leader from Bihar, but also remained a leader who has been continuously detested by a powerful group of Bihar BJP leaders, including Giriraj Singh. He bore the brunt of humiliating loss that the BJP had in the last Assembly Election. He was sidelines and didn’t get Rajya Sabha nomination. He was also denied any position in the state party. But, Sushil Modi didn’t take any backward step. He started to attack Nitish led government from the very first day and soon became the face of opposition of Bihar.  Later, he transformed himself as an anti – corruption crusader with his scathing attacks on Lalu family members and their web of illegal real estate properties. Sushil Modi well documented attack led to fall of Mahagathbandhan and virtual #gharwapasi for Nitish Kumar as JDU – BJP alliance formed the government. Sushil Kumar, the demolition man of BJP, is a lifelong pracharak of RSS. Like others, he
Post a Comment
Read more

Indians are known for promoting their children to the best possible way. Nepotism runs in the blood of majority of Indians. Bollywood is replete with useless actors getting work just because of their parents. So is the case of almost all fields, including politics. In this context, Nitish Kumar is different. He never took any interest to promote any of his family members, even his only son Nishant Kumar. The leaders of Bihar who came out of JP movement have made their children lawmakers, like Ram Vilas Paswan and Lalu. However, Nishant has never shown any interest in the world of politics. Had he wanted, he would have been MP from Nalanda. No one would have stopped him. Nishant is different. Anyone who has met him vouches for his simplicity and broad mindedness. He is a man with vision, yet wants to lead a spiritual life. He is married with a beautiful lady, but aspires to live a life of ascetic. He is a man with first class engineering degree from one of the best colleges of Ind
Post a Comment
Read more

Lipi Singh is a 2016 batch IPS officer of Bihar cadre. She is currently posted as SP of Munger district. In a short span of time, she has attracted attention for being a tough police officer. Her courageous attitude against mafias of Barh and Mokama regions has given her a new recognition as Lady Singham of Bihar. In fact, Anant Singh has become a foe of Nitish Kumar precisely because of her. Lipi Singh had broken the ring of illegal businesses of Anant Singh in the area. Lipi Singh is the daughter of senior JDU leader and former UP Cadre IAS officer RCP Singh. She might have got favourable area for being the daughter of the right hand man of Nitish Kumar. However, taking a look at her performance, it can be safely said that Lipi Singh is completely apolitical when it comes to dealing with law and order of her area. Following is the brief wiki and biography of Lipi Singh : Real Name:  Lipi Singh ………………………………… Nick Name: ………………………………… Date of Birth:  18
Post a Comment
Read more

Kashif Abbasi is one of the most respected journalists of Pakistan. He is known for his probing and tough questions in his highly popular talk show, Off the Record. He is also widely regarded as a journalist who strictly follows non – partisan approach in his presentation. When his wife was caught in a scandal – Mediagate – he didn’t spare even her and hosted a special program on that controversy. Kashif Abbasi was recently in news for hosting the talk show with Ayesha Gulalai, the member of National Assembly who recently quit PTI after making some startling allegations against Imran Khan. This talk show was fiercely debated on the social media. Ayesha could not give proper response to some of his posers which led her supporters to call him a thug working on the money of Imran Khan while Ayesha’s detractors supported him vociferously. Bio and Wiki of Kashif Abbasi Kashif Abbasi was born and brought up in Lahore. His date of birth is 10 th December, 1974. At this ju
Post a Comment
Read more