Reetlal Yadav is an Indian politician and former gangster of Danapur, Patna. At one time, he was a rising face of RJD in Patna region.  His power was evident in 2015 when he won the election for Bihar Legislative Council despite Lalu Prasad Yadav going against him. He had won the election from jail.
In 2020 Assembly Election, RJD gave him ticket and he won with a huge margin. He may be a dreaded figure, but he is also widely loved for being helpful. 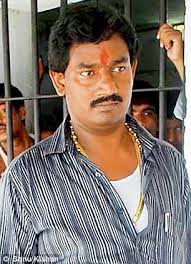 Ritlal Yadav was planning to fight 2014 Lok Sabha election from Patliputra constituency. RJD had given ticket to Lalu’s daughter Misa Bharti. Ram Kripal Yadav was fighting this election on a BJP ticket. Sensing problem, Lalu went to see Ritlal family and by hooks and crooks managed to convince Ritlal to not fight the election. He was even appointed as the General Secretary of the RJD. As a matter of fact, even open support of Ritlal could not help Misa to win that election.

Ritlal became a sort of terror at a very young age. First he fought the Mukhia election from his village Panchayat Kothwan. He easily won this election and slowly started to spread his wings of terror. His name was started to prominently figure in almost every Railway tenders of Danapur Division.

Ritlal was also allegedly involved in the sensational murders of two Railway contractors on Danapur Howrah train near Bakhtiyarpur. Both of these two contractors were Yadav and they were killed on the train itself.

Currently, his father Rameshlal Rai is the Mukhia of Kothwan Panchayat. And, he has already become a law maker.
Reetlal Yadav has recently been absolved from all charges. He has now released from the jail. He has vowed to now live a life of a true social worker without differentiating people on the basis of religion or caste. He wants to become the real hero of Danapur who will be loved by all.

Wife and Family of Ritlal Yadav

As mentioned above, Ritlal is from Kothwan village near Danapur. He is married to Pinky Devi. In fact, Lalu Prasad had promised Ritlal to give ticket to Pinky in 2015 Assembly Election from Danapur. However, it is not going to happen now.